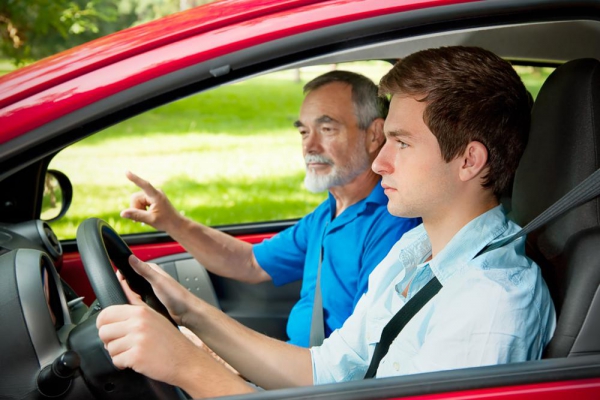 Defensive driving describes the practice of anticipating dangerous situations, despite adverse conditions or the mistakes of others when operating a motor vehicle. It can be achieved by adhering to general guidelines, such as keeping a two- or three-second gap between the driver's vehicle and the vehicle in front to ensure adequate space to stop. It is a form of training for drivers that goes beyond road rules and the basic mechanics of driving techniques. Defensive driving reduces the risk of collisions and improves road safety.

A driver safety program called the Driver Example Program was developed in 1964 by Chris Imhoff of the (US) National Safety Council. The program instituted a Defensive Driving Course (DDC). Defensive Driving Courses, along with Instructor Development Courses were offered beginning in 1964 and 1965, typically through corporate sponsorships.

Several US government agencies, nonprofit organizations, and private schools have launched specialty courses that improve the public's driving skills. In the United States a few of the familiar courses in defensive driving include Alive at 25, DDC or Defensive Driving Course, Coaching the Mature Driver, Attitudinal Dynamics of Driving, Insurance discount, Seat Belt Safety, Handsfree, Professional Truck Driving, and DDC for Instructors. In relation to this, the government has launched active airbag and seat belt safety campaigns that encourage high visibility enforcement.

In addition to improving one's own driving skills, many US states provide an incentive to complete an approved defensive driving course by offering mandated insurance discounts or a way to mask a traffic ticket from one's driving record. In some instances, these courses are referred to as a traffic school or a defensive driving school. States with the biggest incentives include Arizona, California, Florida, Nevada, New Jersey, New York, and Texas. A number of private providers offer a variety of courses.